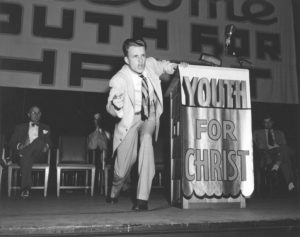 In his early days as a evangelist for Youth For Christ.

For those who might be interested, but who haven’t spent the last two days reading obits and remembrances of Billy Graham, here’s a brief round-up of some of my favorites. Celebrations of Graham’s life abounded everywhere, but I’m focusing on more analytical takes.

Emma Green of the Atlantic and Kevin Kruse in the Washington Post both offer very valuable overviews of Graham’s life and career. And Randall Balmer has a good survey of Graham’s ministry in Religion Dispatches.

David Hollinger in the New York Times describes Graham’s “Missed Opportunities” to teach a more inclusive and modern message; Matthew Sutton makes a similar point in the UK Guardian, but in a more confrontational register. I looked at Graham on the international stage; my piece in the Atlantic focused on the tension between his investment in global Christianity and the political stances he took during the Cold War and regarding apartheid. 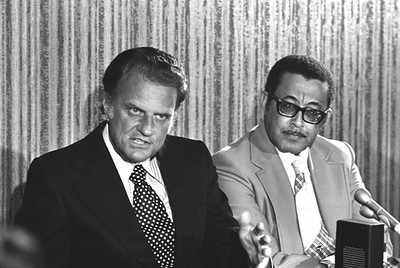 A couple of good pieces focused on Graham’s early years. Here is Anthea Butler’s discussion of his Christian nationalism, in the always invaluable Religion Dispatches. Butler sees Graham as the progenitor of a certain kind of kissing of the ring of power by white evangelicals. And here is the Atlantic’s look back at its early coverage of BG. Several of the remembrances of Graham talk about his complex racial politics, as does CNN’s John Blake, plus this brief but evocatively titled piece in Afro, “Billy Graham, Friend of Martin Luther King, Dies at 99.” Graham’s death should also be an opportunity to remember Howard Jones, who toured West Africa as an evangelist in the late 1950s and became the first Black staffer for the Billy Graham Evangelistic Association.

My friend and colleague Uta Balbier has a great piece on Graham and the 1966 Berlin Conference in the Journal of American Studies, October. 2017.

Speakers on the dais at the World Congress on Evangelism in Berlin, 1966.

Marie Griffith, who just published Moral Combat, on gender, sex, and Christianity, pointed out in a Facebook posting that very few of the remembrances focused on gender, although many of us mention BG’s conservative positions on LGBTQ rights. That limit still seems true as of my survey of the web, but here is an interesting discussion from 2017 of Pence’s infamous embrace of “Billy Graham Rule.” Stephen Prothero has a powerful piece in Politico about BG in comparison to his son Franklin.

One of the more interesting conversations I’ve seen is about whether or not BG really mattered to that many people any more. Certainly a younger generation knows little of him, and perhaps our sense of his importance, even in his heyday, is shaped by the privileging of white Protestantism that happens so frequently in US life. 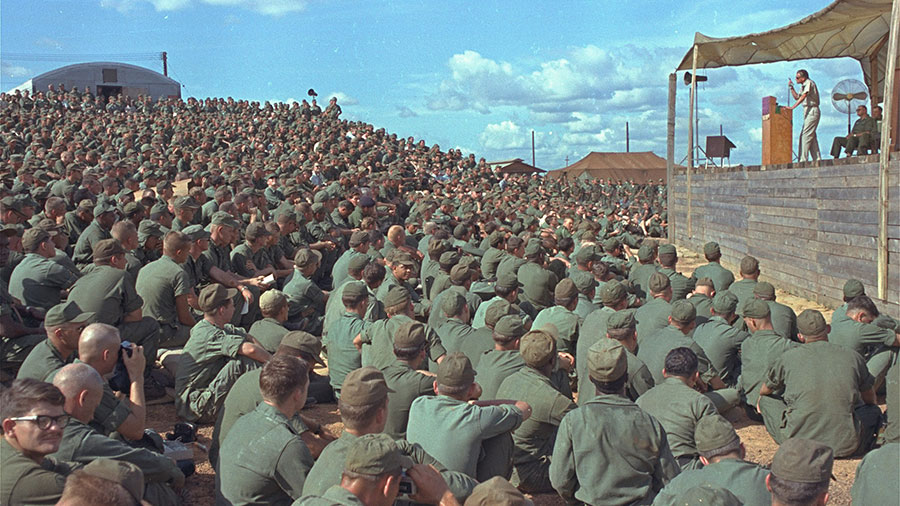 Speaking before troops in Vietnam in 1966.

I admit to some bias on this, not only because I write about evangelicals but because, when I first started working on my book, I didn’t want BG to be that much in it—he was written about so much already. But then, there he was, speaking out (and being widely quoted) on everything from the decolonization of the Congo in 1960 to communism to Vietnam to apartheid to Israel. Still, it IS important to say that he certainly was not pastor to all Americans, not to those who didn’t share his Christianity– which is now at least a quarter of the US population – nor was he the pastor to many Protestant liberals or Catholics, or LGBTQ Christians, or to many people of color (although many also embraced him, in his heyday). That doesn’t mean he wasn’t truly important historically – I am convinced he was. And the intense debate over his legacy gives some indication of just how much he represented some of the complexities of religion and politics in the postwar US.

(Oh, and the essay with the best set of photos is this one, in the Huffington Post; see also this great photo essay in The Stream.)