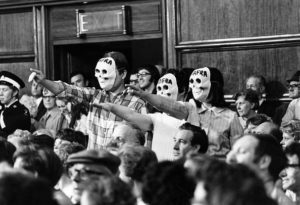 I have begun working on a book that examines the the cultural and affective history of humanitarianism in the Cold War, from 1967-1989–from the global responses to the Biafra war to the various “concerts for hunger” to the political responses (or lack thereof) to apartheid in South Africa and the civil war in Lebanon in the 1980s. The project has been supported by the National Endowment for the Humanities, which allowed me to do research in the US, Europe, and Nigeria in 2017-18. The research has also been supported by a GW University Facilitating Fund grant and a Dean’s Research Chair. 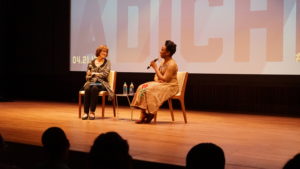 As part of my interest in Biafra, I worked with two other GW faculty members to organize a spring 2017 conference, http://www.rememberingbiafra.com/, to mark the 50th anniversary of the start of the Biafra war. Chimamanda Ngozi Adichie was the keynote speaker, at an event held at the National Museum of African American History and Culture.  (Yes, there I am, doing a Q&A with her!) I am currently working on a digital humanities project, sponsored by GW’s Institute for African Studies, that will create a timeline and other resources for teachers and students who want to teach about Biafra.

In addition, I am co-editing volume 4 of the forthcoming Cambridge History of the US in the World, along with Max Friedman and David Engerman. The general editor of this exciting (and massive) project is Mark Bradley. I am also beginning some work on a future project that will explore how literature and art from the Middle East and Africa circulated in the United States from the mid-1960s to 1989, providing alternative narratives to the Cold War construction of the Third World.

I am very involved with the Society for Historians of American Foreign Relations, and am on the editorial board for the new journal Modern American History as well as American Quarterly.